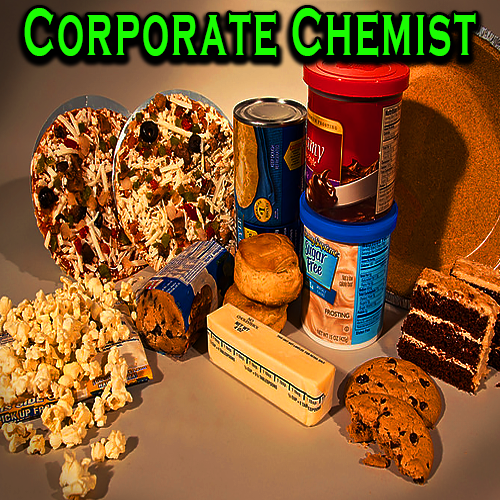 The Corporate Chemist has modified our food. We do not always eat what we think we are eating.

Somewhere under the rainbow
In our own kitchen we find
A place where dining is a pleasure,
A haven to rest our body and mind

Colored, flavored, sweetened and salted.
To sell this food, so it must be
Delicious to the taste and marketability
With no regard for health or utility

Sugar-froots, pop-tarts and corn flakes
These are sugars, fats and carbohydrates
Good advertising and brightly colored yummies
For the long journey to the little tummies

Somewhere under the rainbow

For eons of time the human body maintained its weight equilibrium. Suddenly— about fifty years ago—something changed that upset the apple-cart and is now forcing us to work hard at keeping a healthy balance.

It seems that the food industry has done too good a job of selling us delicious food. Doctor David A. Kessler. MD, who served as the commissioner of the US Food and Drug Administration for presidents Clinton and Bush, has explained this problem in his new book, The End of Overeating. This book is good reading for anyone who is serious about healthy eating.

The corporate chemist at the mega-food industries have invented ways to make our food hyperpalatable. I personally think that the every corporate chemist has run amok. Our food has been refined to the extent that it is now so delicious that we literally can’t seem to stop eating—even when we are full.

That is bad enough by itself but they learned to instill conditioned hypereating, and we now feel unsatisfied even when we have eaten enough of their hyperpalatable food. Conditioned overeating happens much like Pavlov’s dogs that salivate and get hungry at the ringing of a bell, we are hit with the food wizard’s gavel of: cues, priming and emotions. These are all built into the advertising, packaging—the processed “doctored” food itself.

I used to blame the overweight people’s problems on themselves, but now I am thinking that they are innocent victims who have lost the battle of the bulge. The fight to maintain a decent body-weight balance is much tougher than I had realized. The public appears to be fighting a lonely, losing battle.

The world’s corporate, government and scholastic laboratories have an endless array of brilliant people with tons of money. They create wonderful taste sensations that are irresistible, and they began by indoctrinating the little television watchers to eat what they pushed at them. These powerful educators twist our ideals armed with artificial and natural flavorings, colorings, odor-enhancers, sugars, fats, salt, emotionally advanced advertisements—and a kitchen full of an endless array of magic tricks

One of the aspects of processed food is that you can take two or three chews and swallow the whole mouthful; it literally melts in the mouth. The restaurant industry is now offering a “slider” which is swallowed on the second chew. No need to chew twenty or thirty times. They pre-chewed much of the processed food and glued it back together. By eliminating the need to chew we can eat more and faster—we can eat more before our appetite is satisfied.

The corporate chemist did not stop there. Also, they attacked and changed our drinks. Starbucks sells strong, sweetened coffee that amounts to warm milk in a bottle—adult baby food.

Nothing is real in today’s food, colorings, flavorings—even so-called natural flavorings—these are refined chemicals. Shelf-life, appearance, smells, texture and many other things calculate into the marketability of the product. If you order French fries, or even green beans in a restaurant, you are almost certain to receive well doctored food. The situation is hopeless.

I took two dignified ladies to lunch at a nice restaurant. The appetizer was a plate of delicious smelling grated cheese, which the waitperson coated with olive oil from heaven. This smelled good enough to send Pavlov’s dog howling up a tree. My two guests sampled this by dipping in some “Old World” bread pieces. After they took a few tastes of this they attacked it like a pair of hungry wolves—I kept my fingers clear until the plate was clean. When the waitperson returned to find them primed to order big time. Marketing attacked these innocent victims. It primed them with the stimulating appetizer.

I have come to the conclusion that my best defensive position is to eat foods designed by nature, not industry. High fiber whole foods assimilate more easily by the body. This doesn’t need much explaining. They are foods that have not been altered by being processed. These foods are energy dense, not calorie dense.

If you are concerned about the time it takes to prepare these foods—don’t prepare them just eat them. Raw foods taste pretty darn good. Please read my article on WHOLE FOODS.

While parental discretion tries to do a better job. It becomes a tough task nowadays. The marketers reach the children before they enter the supermarket door. The role of the stern grandparent became mollified. These baby boomers only want to spoil the child. Our news media depend on the advertisement money from the food industry. The government and the medical industry have other agenda on mind—I don’t know what it might be. They do not serve the public well.

Some European countries are attempting to tackle the problem through regulation, but this is a long way off, if it ever became effective.